Alcon Entertainment’s announcement of a “Point Break” remake is heartbreaking 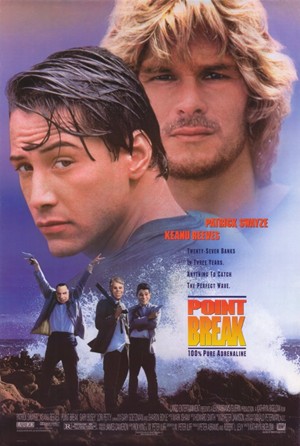 Some movie remakes, like “True Grit,” turn out to be as good as, if not better than the originals, others like  “3:10 to Yuma,” not so much.

Fans of the 1991 film “Point Break,” which celebrated its 20th anniversary this month, seem to fear its remake will fall into the not so much category. Unfortunately, Andrew Kosove and Broderick Johnson of Alcon Entertainment obtained, from RGM Media, the rights  to remake the popular film.

“Point Break,” considered the film that officially launched Keanu Reeves’ acting career, is also considered a timeless classic. In the film, Reeves plays Johnny Utah, an FBI agent who infiltrates a gang of bank robbing surfer dudes. The late Patrick Swayze played, Bodhi, the leader of the gang. Rounding out the cast of main characters are Lori Petty as Utah’s love interest Tyler; Gary Busey as Utah’s partner and mentor Pappas; and John. C. McGinley as, Ben Harp, the jerk supervisor the audience loves to hate.

As with most remakes — if not all, the new “Point Break” will be nothing more than a regurgitation of the original film with fresh new faces in the starring roles. To begin with, the backdrop will be the world of international extreme sports instead of surfing. The basic premise of an FBI agent finessing his way into a group of criminals remains unchanged. The filmmakers are keeping the other changes a secret for now.

Kurt Wimmer, who wrote the screenplays for “Salt” and “Law Abiding Citizen” will write the screenplay for the new “Point Break.” Johnson, Kosove, Michael DeLuca, Chris Taylor and John Baldecchi who will produce the film seem excited about the project and how the new movie will fare when compared to the original, which was directed by “The Hurt Locker” director Kathryn Bigelow .

DeLuca stated, “’Point Break’ wasn’t just a film, it was a Zen meditation on testosterone fueled action and manhood in the late 20th century, and we hope to create the same for the young 21st!” That statement begs the question, couldn’t they have created that same energy with a completely new movie?

The negative reactions that met Alcon Entertainment’s announcement imply that the remake won’t fare well at all. For now, it seems to be a done deal. So, who should be cast in the starring roles? Who would play Johnny Utah? Who would play Bodhi? And what about Pappas, Tyler and Ben Harp? The casting director for the “Point Break” remake has his work cut out for him.