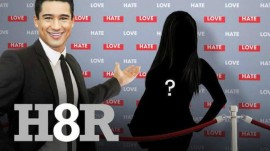 That’s the question Mario Lopez hopes to answer each week on the CW’s new “reality” television show, “H8R,” which airs on Wednesday’s at 8 p.m. EST. The show premiered on Sept. 14 with “Jersey Shore’s” Nicole “Snooki” Pilozzi and “The Bachelor’s” Jake Pavelka in the hot seat.

On the show, ordinary people who hate certain celebrities or television personalities explain why they hate said celebrity or TV personality during what they think is an interview for a different reality TV show. The hated celebs listen to what the haters have to say, speak in their own defense, then go and confront their haters and try to win them over.

The premiere episode opened with Pilozzi’s hater saying he hated her because she’s not really Italian. For those who don’t know, Pilozzi was born in Santiago, Chile.  An Italian-American couple adopted her when she was six months old. The hater also called her a “drunken slut.” Long story short, Pilozzi confronted her hater, won him over and all was right with the world once more. Pavelka didn’t do so well.

Pavelka was sent home by Jillian Harris on “The Bachelorette,” but went on to find what he thought was true love with Vienna Girardi when he took his turn as “The Bachelor.” Alas, it was not meant to be. Girardi and Pavelka broke up on national television and most female viewers sided with the teary eyed Girardi. That alone made Pavelka’s  battle with his hater an uphill one.

Pavelka’s hater, a 20-year-old girl who believes everything she reads in tabloids and gossip magazines, said she thought Pavelka was arrogant, a coward and possibly gay.

Well, he confronted his hater, took her flying in an airplane and had a heart-to-heart with her in The Bachelor’s mansion. No dice. His hater hated him just as much at the end of their day together as she had at the beginning.

Week two featured Kourtney Kardashian’s boyfriend and baby daddy Scott Disick and “Despereate Houswives” star Eva Longoria. Needless to say, Eva Longoria won her hater over with ease. Even Mario Lopez asked, “Who hates Eva Longoria?” She cooked with her hater in her restaurant, Beso, and told him about her philanthropic activities in the Latin-American community, to show him that she is not, as he had believed, ashamed of her Mexican heritage. Disick had more of a bittersweet end to his encounter.

Disick’s hater repeatedly referred to him as a “douche” or a “douche bag.” When he first encountered her, he, like Pavelka, behaved in a way that confirmed what his hater believed about him. It was all an act to get the girl to start bad mouthing Disick. She did. Later, he confessed that he’d been putting on an act, took her bowling and did his best to convince her that he’s a changed man. Gone is the jerk of old. He even went so far as to help a bowling alley employee clean a pair of bowling shoes. He drew the line when the girl tried to get him to clean one of the restrooms. When he asked her at the end of the evening if she was still a hater, she admitted that she’d changed her mind about him. But there’s a catch.

Disick ended up hating his hater … “with a passion.” Why? Because she told him that she’d never been hated by anyone … ever. She never gave anyone a reason to hate her. Tell that to Eva Longoria.

Regardless whether or not viewers hate the featured guest, the real question is will they love or hate H8R?

Did you watch the first episode? Let us know what you think