Posted in Entertainment, News | Tagged Charlie Sheen, chuck lorre, two and a half men, warner bros
By AJ on September 27, 2011 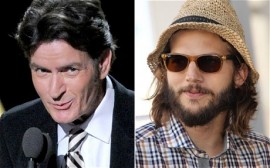 arlie Sheen was fired from Two and a Half Men, Chuck Lorree and Warner Bros. have decided to settle the 100 million dollar lawsuit filed by Sheen in March.Charlie was the highest paid actor on television, receiving 2 million dollars for every episode of Two and a Half Men, including the back-end. The settlement for the back end from the show was a reported 25 million dollars, which is not a bad severance package for calling your boss the C-word.

Ashton Kutcher is the new star of the show that according to Charlie turned it’s jokes from a tin cans into gold. Only time will tell if the show will hold up and Charlie Sheen as well. Sheen has been cordial of late wishing ‘all the best’ for the cast of the show. The premier of the new season reached nearly 28 million people, all wanting to see how they killed Charlie’s character off. The only thing left up in the air now is whether or not people will tune in to see the same jokes and virtually a carbon copy of the show without the rock star from Mars.