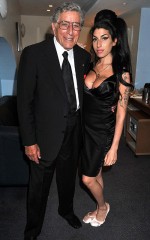 Winehouse’s passing roughly two months ago came as a devastating blow to the current music scene.  Her soulful voice and music helped shape her craft in a way that allowed her to stand out as a true and original artist.  Now, on the day that would have been her 28th birthday, a digital download is available for the long-awaited duet between Winehouse and Tony Bennett.  The track, titled “Body and Soul”, was recorded at Abbey Road Studios in London and was the final recording of the 27 year old singer.  The session was also filmed by Dion Beebe, the Oscar-winning cinematographer known for films such as “Chicago” and “Memoirs Of A Geisha”.

All proceeds from the sales of “Body and Soul” will go to The Amy Winehouse Foundation, an organization founded by Winehouse’s parents to support young people struggling with ill health, disability, financial disadvantage, or addiction.  The song will be featured on Bennett’s upcoming release, Tony Bennett: Duets II, which will be released via RPM/Columbia Records on September 20th.

Go here to download the single.  Let us know what you think!

Tracklist:
1. The Lady Is A Tramp with Lady Gaga
2. One For My Baby (And One More For The Road) with John Mayer
3. Body And Soul with Amy Winehouse
4. Don’t Get Around Much Anymore with Michael Bublé
5. Blue Velvet with k.d. lang
6. How Do You Keep The Music Playing with Aretha Franklin
7. The Girl I Love with Sheryl Crow
8. On The Sunny Side of the Street with Willie Nelson
9. Who Can I Turn To (When Nobody Needs Me) with Queen Latifah
10. Speak Low with Norah Jones
11. This Is All I Ask with Josh Groban
12. Watch What Happens with with Natalie Cole
13. Stranger In Paradise with Andrea Bocelli
14. The Way You Look Tonight with Faith Hill
15. Yesterday I Heard The Rain with Alejandro Sanz
16. It Had To Be You with Carrie Underwood
17. When Do The Bells Ring For Me with with Mariah Carey