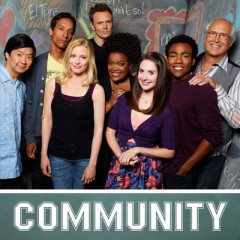 As a forewarning I must say; at the literal five second mark into the latest episode of Community, I had to pause the show and take a breather, because it was literally one of the best things I’ve ever seen.

When I elected to continue the show, however, I was not ready for what followed. Season three of Community (much like season two) opens with a mission statement; the show openly declares it intends to be both “more fun” and “less weird” than the previous two seasons combined. Although one may just view this mission statement as sarcastic, considering the message is delivered via a highly choreographed musical number which begins with Joel McHale’s character flying on screen. If you’ve never seen Community (and my goodness do I pity you), now may be a good time to mention: Community is quite possibly the most self-aware sitcom ever broadcast.

The shows basic premise concerns the day to day lives of a group of outcasts at an embarrassingly awful Community college. Though, the shows not really about that. Community is an eternally clever, loving (and cynical) examination of the television sitcom. Seemingly every episode either pays homage to or outright acknowledges a certain trope of the medium, and raises a magnifying glass to the tried and tested formula of on-screen comedy. Simply for attempting (and indeed achieving) something like this is reason alone to call the show brilliant, but Community also holds another great secret: it’s actually incredibly funny. It’s incredibly funny, and has a huge amount of heart, and it’s difficult not to fall in love with it’s characters.

Initially, there were reports that Community was going to tone down the weirdness. The show being so odd, I wouldn’t be surprised if it sometimes scared new viewers off, so it wasn’t really surprising to hear this. However, after seeing the series opener, it’s hard to think the show could get away with toning down the weirdness now. In fact, I can only think of one series opener stranger than Community season three, and that is the first episode of the second season of Twin Peaks (but that was a David Lynch affair, so no surprises really). In the first episode, the show manages to lovingly poke fun at musicals, Dr. Who, British comedies in general and so perfectly pay tribute to a cinema classic that I’d feel guilty to spoil it. Scenes like these also confirm that Community is also quite possibly the best looking sitcom on television. The wonderfully realised scenes the show relies so heavily on owe a great deal to mise-en-scene and camera work – there isn’t a single element of laziness in the show.

The episode opens by hilariously tying up the loose-ends of the previous season in a quick, sloppy way. This is good – it doesn’t let the heavier moments of the series get in the way of the comedy. While dramatic at times, the drama is always there to create an investment in the characters and essentially, heighten the comedic little character moments the show is filled with.

On top of this, the show also adds two new characters as well as promoting Jim Rash (the charismatic Dean) to series regular. This season, Community adds both John freaking Goodman and Michael Goddamn K Williams to the cast of characters. I must make clear: Community, the best comedy on air, is adding Omar from The Wire and John Goodman, who is John Goodman. How in God’s name can something so beautiful happen?

Dan Harmon (series creator) is a smart man, though. He allows Michael K William’s to be Omar enough for the novelty, but also asks him to make the character his own. John Goodman, as always, takes over whatever scene he is in, and although he wasn’t comedic gold in the series opener, they’re obviously setting up his character to be genius. We also have word that Martin Starr (Roman from the wickedly funny yet sadly cancelled Party Down) will also be starring later in the series, as if you needed more reason to tune in.

I can only hope the shows prophecy regarding itself is wrong. At the end of the episode the Dean declares that this year won’t be different from the last two – though they’ll have less money. I’m not sure what Community’s budget is, but it always made terrific use of it. Mention any of the paintball episodes to a Community fan and prepare to listen to them gush. It would really be a shame if the shows budget had been significantly cut. There was also a running joke about the possibility of rival show Cougar Town being cancelled – I can only pray they actually are referring to Cougar Town (sorry CT fans).

If there’s anything to take away from the first episode of the third season of Community, it is be prepared. With a stellar cast, a revised writing style (Dan Harmon mentioned studying story structure of The Wire when writing the third season) and the refreshing, beautiful Community feel, I couldn’t be more excited for the oncoming series. If you haven’t seen Community, please pick up the first two seasons, and please, be sure to tune into NBC Thursday nights for (I’ll say it again) the best comedy on TV.