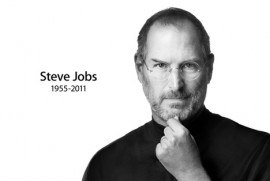 Apple co-founder, and visionary, Steve Jobs died Wednesday at the age of 56. Jobs, who had battled cancer for years, stepped down from his position as chief executive at Apple in January because he could “no longer meet (his) duties and expectations.”

Steve’s brilliance, passion and energy were the source of countless innovations that enrich and improve all of our lives. The world is immeasurably better because of Steve.

His greatest love was for his wife, Laurene, and his family. Our hearts go out to them and to all who were touched by his extraordinary gifts.

In his public life, Steve was known as a visionary; in his private life, he cherished his family. We are thankful to the many people who have shared their wishes and prayers during the last year of Steve’s illness; a website will be provided for those who wish to offer tributes and memories.

We are grateful for the support and kindness of those who share our feelings for Steve. We know many of you will mourn with us, and we ask that you respect our privacy during our time of grief.

Jobs is survived by his wife of 20 years, Laurene, and four children.

Previous Entry: Desperate for Roles? What the Housewives Should Do Next
Next Entry: IPod: Ten Years of Innovation from Steve Jobs