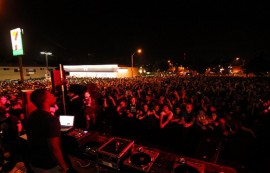 The Los Angeles beat scene made a bold statement this past weekend as 10,000+ people flooded the streets surrounding the Low End Theory Stage at LA’s 13th Annual Eagle Rock Music Festival. The 12 stage outdoor street event boasted over 50+ local artists in the span of 6 hours essentially for free ($5 optional donation).Low End Theory, an infamous exclusive weekly party in LA that features the city’s most noteworthy beatmakers and DJs hosted a stage that featured many of their highly touted artists. Backed by a massive sound system provided by Pure Filth, the bass coming from the stage pulsated all throughout the night and left quite the impression at the event.

Low End Theory’s resident DJs The Gaslamp Killer, DJ Nobody, DaddyKev, and D-Styles kicked things off by pumping the sun-drenched crowd (which steadily kept increasing despite the hot weather and no shade) with sets consisting of new and old music by a lot of the artists featured at their events such as Gonjasufi, Odd Future, etc which effectively introduced new audiences to the sound of the beat scene (a good portion of the crowd had no idea what was going on) and dubstep/remixed versions of popular songs such as Waka Flocka Flame’s “Hard In The Paint”. Nocando, the resident host emcee of Low End Theory then went into the only pure vocal set of the night as the Los Angeles rapper performed tracks off his latest album Jimmy The Lock along with his recent collaboration with producer El-P and brought fellow Los Angeles emcee Busdriver to perform a song off their recent collaboration as the duo Flash Bang Grenada. For those unfamiliar with Busdriver’s very animated and technically precise flow, the audience was completely hyped watching him perform despite a malfunction with his microphone. Nocando would then drop in during some of the other artists’ sets to freestyle over their beats and get the crowd more hyped.

Young up and coming producer/rapper Jonwayne, dressed in a Hawaiian-style button up then proceeded to rock the crowd (now jumping wildly instead of just head-nodding) with an intense set where he played around with the tempos of tracks off his recent project Bowser. He kept his set strictly instrumental but made appearances later in the night during beatmakers Dibia$e and Nosaj Thing’s sets to rap a few verses over their beats. His set was arguably the most consistent of the night and the crowd loved him as he made his reappearances in rapper mode.

Being in almost every section of the crowd throughout the event, I saw all sorts of people from different walks of life uniting to witness these sets that were for the most part, instrumental. It was interesting to see how each person reacted to what exactly was going on. Some people were standing straight up, entranced; some were dancing the hell out of themselves; some were even hula-hooping in the back. Nocando himself said that the Low End Theory sound and approach is a very acquired taste, and it became apparent as I saw some people walking away confused or discombobulated due to the booming sound system.

Following Jonwayne was a series of impressive sets by producers Teebs, Dibia$e, TOKiMONSTA and Nosaj Thing along with the Low End resident DJs hitting the stage again for their second sets. This definitely prolonged the whole event but I was able to tell that everyone was enjoying themselves along with the crowd, despite some fatigue as I saw several people being escorted out of the crowd due to exhaustion. Once Dibia$e’s set commenced (3rd hour), the yellow tape lining the sidewalks could no longer contain the crowd. What resulted was pretty much a sea of people bouncing to the beat and maneuvering through each other to get a better view.

Second to last guest performer of the night was producer Nosaj Thing, who delivered a very entrancing set that included his hit single “Aquarium” which Kid Cudi used for his track “Man On The Moon (The Anthem)”.

Closing out the night was Low End Theory resident DJ The Gaslamp Killer followed by headlining act Flying Lotus. Gaslamp Killer was very satisfied with the crowd and he made his appreciation known throughout his very passionate set. At this point the crowd was rejuvenated due to how unexpectedly massive this show became. Producer Flying Lotus went into his set along with bassist Thundercat and closed the show with nothing less than a bang.

Eagle Rock Music Festival was definitely an amazing experience for me as an audience member as I have never seen such as massive show like this continue for a consistent 6 hours. The show was a huge success for LA’s beat scene and I could tell there were new eyes and ears open to this relatively new subculture. However, I do recommend concertgoers for next year’s festival to definitely wear comfortable clothes and beverages to hold you down for the night.