Arrested Development miniseries and film could actually be happening 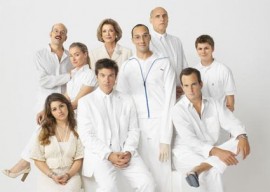 What is there really to say about Arrested Development? It’s one of the only comedies I can think of to use foreshadowing so well, by the end of the season plot points would tie together in order to become even funnier and there were constant callbacks to previous episodes and jokes. It was a show that was undeniably esoteric, but it was also genius and really rewarded its viewers for paying attention.A common phrase I’ve seen thrown around is to call it “The Wire of comedy”. The show got increasingly more inventive, increasingly more meta and progressively better with time – and then it got cancelled. It’s basically why I’m so scared for Community.

The Arrested Development movie is basically a joke now. It’s been promised and teased for so long with so little to ever show for it, that it’s hard to believe any progress has been made whatsoever. It’s something nerds bring up alongside Duke Nukem forever as a fantasy project that will never actually happen. But! Behold, just as Duke Nukem Forever was released this year, news is spreading of an Arrested Development comeback! (Let’s just hope it’s of significantly higher quality than Duke Nukem Forever).

This situation seems more hopeful as Mitch Hurwitz, show creator, is actually naming networks that are interested. In fact, Entertainment Weekly has even confirmed that Showtime and Netflix are talking to producers about getting the show created. I’m as surprised as you, it turns out Mitch wasn’t just, you know, lying. He tells Entertainment Weekly his ambitious plans:

“We’re basically hoping to do nine or 10 episodes with almost one character per episode, where like the first episode will just be Buster. We’re kinda picturing it like, um, well the latest joke we have is that, you know, it’s Cambridge, Massachusetts and there’s all these scientists in lab coats and they’re waiting for somebody and Buster comes through the door wearing a lab quote and says `let’s begin,’ and they say, `you don’t get to wear the lab coat, we’re experimenting on you. [garbled] And then we go through his life and we meet the people in his life and maybe he goes to see his therapist who he’s getting a good rate on because it’s Tobias and he’s lost his license. We can do cross overs and things like that. But it’s an unusual style of show I think and we get him to a certain point of peril in his life and then maybe we jump over to like Maeby and she’s living with Cornel West … We’ll do this kind of thing that builds the peril in their lives until they all come together, really, in the first scene of the movie. It requires, and Ron [Howard] has been working on this too, it just requires studios to work together, they don’t normal work together in film and TV. It’s a really ambitious project but it’s also a very simple project in a way because it kind of gives the fans a level of detail for `granularity,’ which is a big word on the East Coast.”

Of course, as Hurwitz himself also states, he’s facing a big problem; “[the project requires] studios to work together that don’t typically work together, film and TV.”