Desperate for Roles? What the Housewives Should Do Next 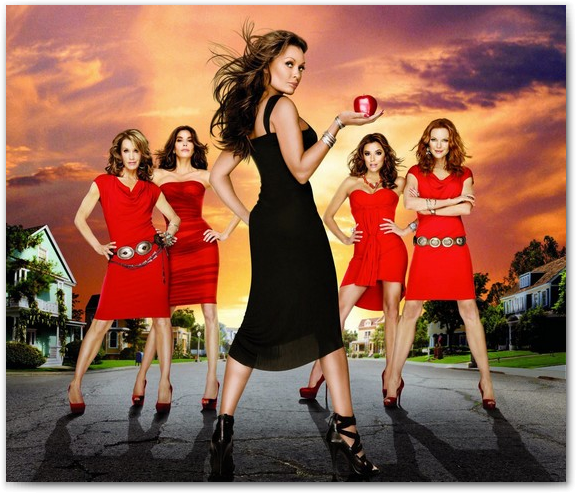 The cast of Desperate Housewives have been near the top of the highest-earning women in television for years, but now that the series is coming to an end, we wonder what their next career move should be.

It is a fact that the show isn’t what it used to be, but back when it first started out in 2004, the “dramedy” was at the top of the Nielsen lists and catapulted the careers of its stars: Teri Hatcher, Felicity Huffman, Marcia Cross and Eva Longoria.

Vanessa Williams also bids farewell from DH, so do you think she has a better future in showbiz than Teri Hatcher? Here’s what we think:

When she was Lois Lane she was sexy and even sexier when she appeared on Seinfeld, but now she’s just a pretty lady.

One thing we do believe though is that Hatcher can do physical comedy well, so we’re thinking she should do light-hearted sitcom. She definitely has the comedic chops and she sells “I’m such a spaz” so well.

She’s an Oscar nominee and an Emmy award winner, so it’s safe that the woman has talent.

Since she already experienced the popularity and fame, it would be neat if she embarked on a quest to capture the Oscar she truly deserved for Transamerica.

Marcia Cross is without a doubt the break-out star of Desperate Housewives, but at the very beginning of the show, Bree Van de Camp was the most complex, engaging character, and Marcia Cross did an excellent job giving life to the crazy yet repressed woman.

We didn’t have a doubt she could do wonders with Bree after we saw her on Melrose Place, especially in that scene where she takes off her wig.

There’s only one place we want to see her, and that’s on Pretty Little Liars, portraying the evil sister of Ashley Marin (Laura Leighton), so we can finally have a reunion of Kimberly-Sydney.

There’s not a doubt that Eva Longoria has the most promising career post-Housewives, so for her the sky’s the limit.

When Desperate Housewives ends its run, Longoria will have 8 years in television, so we expect her to jump into film.

Sure, she hasn’t had the best luck there, but she really only needs one good role and she’ll easily jump into the A-list (if she isn’t already).

When it was announced that Vanessa Williams would transfer from Ugly Betty to Desperate Housewives we really thought she was going to make a splash, but unfortunately it wasn’t the case.

We know she’s sexy and she can play bitchy, but honestly, we hope she can do something more post-show.

Since she’s also a singer, a turn to Broadway would be a good opportunity for her to showcase her many talents.

What do you think the ladies of Wisteria Lane should do next? Let us know in the comment section.