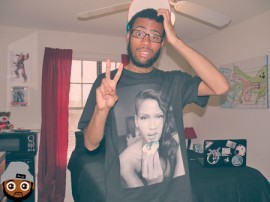 We featured Austin, TX artist Curbside Jones‘ recent project The Cherry Blossom Effect: Endless Dream Theory a few months ago, and now he’s following up the project with a remix album. This project, titled The Cherry Blossom Effect: Remix Theory will feature remixes of a few of the songs on the album by different producers along with alternate versions of some of the songs as well. “ZombiePharaoh4000!” is an alternate and expanded version of the track “ZombieKing3000!”, which has a really deep concept as Curbside thoroughly explained in our recent interview with him. Stay tuned for the full remix project coming very soon.