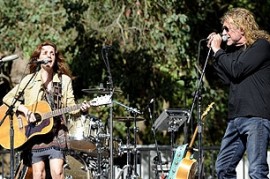 Golden State Park in San Fran held the Hardly Strictly Bluegrass Festival. The event that started in 2001 has turned from a three-day bluegrass concert into a wide array of different artists and a ton of music fans enjoying a long weekend of good music and good people. From punk rocker Thurston Moore to Robert Plant and his Band of Joy, the festival has been a wonderful music experience put on by venture capatalist Warren Hellman.

The concert, which is not only free but free from advertisements and sponsors is a gift to the fans. This years fest celebrated the tenth anniversary of the concert and was not only an experience for the fans but the musicians taking in the music as well. “It’s the coolest American festival that I’ve been to,” Elbow’s Guy Garvey told Rolling Stone backstage shortly before the band’s headlining set on Sunday. “It reminds me a bit of Glastonbury – mainly the way Glastonbury used to be, actually. The vibe is really buzzing and really old school and everybody’s really happy.”

The three day festival is the biggest live concert in the US in attendance, drawing in over 600,000 fans. Free concerts in the bay area have been going on since the sixties and Warren Hellman’s festival is something every billionaire should think about doing.