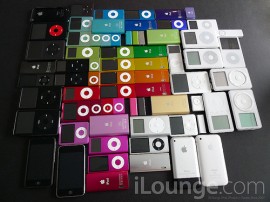 A Rainbow of IPods 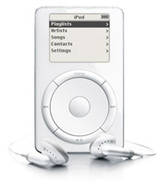 It’s been ten years since the announcement of the first generation IPod. Sadly, Steve Jobs, the innovative mind behind the device that changed the world died Wednesday unexpectedly just over a month away from the tenth anniversary of the IPods release.

The title of the press release from Apple on October 23rd in 2001 read: Ultra-Portable MP3 Music Player Puts 1,000 Songs in Your Pocket. “With iPod, Apple has invented a whole new category of digital music player that lets you put your entire music collection in your pocket and listen to it wherever you go,” said Steve Jobs, Apple’s CEO. “With iPod, listening to music will never be the same again.”

Steve was right, but the world of music was just the beginning of what he would change. From that day forward the entire world was changed forever and looking back at the first gen IPod it is hard to believe how much the technology has advanced in ten short years. We now have the ability to store tens of thousands of songs, videos, apps that can virtually do anything under the sun, make phone calls, check e-mail, download music and surf the web with blazing speed…all with one device.

Prior to the release of the IPod we were struggling with massive books filled with CD’s that screamed to be stolen from cars and MP3 players that caused headaches with poor interfaces, low storage capacity, and questionable sound quality. The world was beginning to fill up with digital music and no new, easy ways to listen to it.

Apple’s legendary experience in creating easy to use interfaces made it simple for non-tech-savvy people to take their music libraries with them anywhere. The skill of providing people with something powerful, useful and most importantly easy to use is what has made Steve Jobs and the Apple team the kings of communication and media. Starting with the re-invention of the personal computer in the 70′s, Jobs saw the future of how powerful the once limited computer technology market could be.

Nearly ten years after the IPod hit the shelves Apple has sold over 300 million devices, which means if each owner had only one device 25 percent of the world population would have one. First year sales of the original IPod totaled 336,000 units and so far this year have sold 100 times that number, 36,000,000 and should grow significantly before the year is over.

There have been six different versions of the IPod in different generations not including the IPad and IPhone. The IPod Photo was integrated into the main line and the IPod mini is now the IPod Nano. Each of these devices offers something a bit different to fit the lifestyles and uses of people, despite some people believing different models were invented to purely gain profit. The IPod Nano and shuffle gives athletes of all kinds the ability to listen to music or take pictures without the risk of damaging the big screen on the Touch, are nearly weightless and require zero fumbling through menus. The main versions of the device offer versatility and endless functions in a sleek package.

The popularity of the device is so undeniable that many competing companies make new products with the compatibility to the IPod in mind. If you can’t beat em’ join em’ I guess.

The IPod has not only changed the face of music forever but also changed the way we learn. From kindergarten kids to freshman at Duke and executives from all over the world use the IPod, IPad and IPhone as a teaching and learning tool. Actually every freshman that attends Duke is given an IPhone on the first day of school. Besides earning a reputation as a respected entertainment device, the IPod has also been accepted as business devices. Government departments, major institutions and international organizations have turned to the IPod line as a delivery mechanism for business communication and training, such as the Royal and Western Infirmaries in Glasgow, Scotland, where IPods are used to train new staff.

The possibilities of Steve Jobs wonderful ideas seem to be endless and have made the world a better place. Jobs did an excellent job of keeping secrets and I wouldn’t be surprised if he had a slew of hidden ideas for the next twenty years. Since Steve Jobs knew that his time was limited and it’s not far-fetched that Apple could be given an IPad full of his ideas that will further change the world. One can only hope.

Stay tuned for my weekly articles about the influence of Steve Jobs and the changes the IPod has brought to the world over the past ten years. We will take a deep look into the IPod generation of music, entertainment, learning and what the future of the IPod may hold.