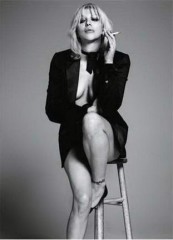 One of Courtney Love’s favorite pastimes is to talk about herself, so it’s not a surprise that the actress-rockstar is set to write  an autobiography. The memoir will be released under William Morrow, a HarperCollins imprint, and it will be tentatively published next fall.

In this Love story, the Hole frontwoman will address her life with Kurt Cobain, her music and film career and drug problems.

According to William Morrow, Courtney will once and for all “set the record straight” in this project.

She’s not the type to sugarcoat things, so we can’t wait to hear her thoughts on Dave Grohl, Krist Novoselic, Billy Corgan, Drew Barrymore, her daughter and, of course, Kurt Cobain.

Will her memoir be as wild, crazy and profane as Courtney herself? We sure hope so, and we’ll probably be reading it while smoking a cigarette.