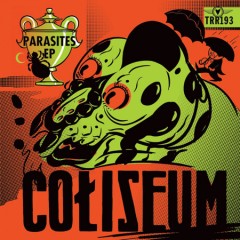 Before I dive into this review, allow me to preface my opinion on music that revolves around the realm of punk. I believe (and will argue) that true punk died roughly after the slow and painful demise of early 90s hardcore punk (right around when Scared Straight became Ten Foot Pole…yeah, that actually happened). That being said, every so often bands come around that hit on nuances and attitudes reminiscent of the punk we all know and love. While perusing Coliseum’s latest release, Parasites, I found some of the qualities mentioned prior. Before finishing the ep, however, they flip these characteristics upside-down and genre-bend significantly enough to draw attention to themselves. Whether or not this is appreciated is up to the listener, but I believe they managed to pull it off in an appropriate manner.

The opening track, “One Last Night” gives the impression of a somewhat lo-fi old school garage punk group. With a steady adante intro akin to The Grim’s “Saipan Death March”, it quickly jumps into the meat of the track, angrily pushing through both vocals and instruments. One of two tracks on the ep to break the three minute mark, it is only noticeable when the last minute or so deviates from the initial brutality, moving into a tempo similar to the intro. This brief peek into a band that might pass off as a 90s punk group quickly fades once the next song is introduced.

Harmonized guitar riffs, spacey verse instrumentals, and a rockingly catchy chorus are a curveball when matched against the previous track. “Waiting (Too Late)” sounds almost like a Foo Fighters who just got out of prison for homicide and decided to go back to the studio. Okay, maybe it’s not as gruff as prison per se, but it’s still more intense than your average rock band. This song is followed by “The Fiery Eye”, which – pardon if I step my boundaries – doesn’t really feel like it necessarily needed to be a part of the ep. Aside from the cool outro transitioning into “Ghost of God”, it just seems like the scatterbrain uncle who only talks briefly, but leaves a sour impact at your family reunion (just in time for Thanksgiving!).

“Ghost of God” brings the group back into their own again, drawing from “Waiting (Too Late)” with a little more emphasis on effects. The key trait preventing Coliseum from making the successful transition back to a “heavy band” rather than a “heavy” normal rock band is the lack of technical intensity throughout songs. “Ghost of God” is a solid track through and through, but after the chorus where mind-melting drum fills could be inserted to set faces on fire, nothing more than a couple tom hits here and there can be heard. Critical rambling aside, the song is one of the stronger on the album and utilizes all three and a half minutes to the best of their abilities.

The second half of the ep shows a much heavier side than what has previously been sported with tracks such as “Waiting (Too Late)” and “Ghost of God”. “The Big Baby” shows the true nature of what vocalist Ryan Patterson is capable of concocting. The stark polarization between the voiceovers and primal grunt/screams make for a truly dynamic track; and hell, it’s the shortest one on the moflipping album!

“Gone with the Pope” and “Blood of the Beast” can be successfully bundled together as one large anthem to blast if you’re pissed and wanting something to listen to whilst punching trees at your local park (trees being interchangeable with any other object in your local park, obviously). The words are overall indiscernible, but I would assume they would only cater to a rage similarly fostered through the instrumental. These tracks begin to show a drumming style more along “hardcore” standards, keeping the release interesting.

“Give Up and Drive” blends all previous styles mentioned and creates a summary of Parasites for us. Whether you were a fan of the homicidal Foo Fighters, the bench-punching tunes, or even the blitzkrieg cluster of “The Fiery Eye”, all parties appear to be present in the final track. Overall, Parasites can be summed up as a solid release from Coliseum, but doesn’t have the brutality of past records. Regardless, the album is worth listening to for its nods to old school punk, Patterson’s gruff vocals, and an intensity without seeming contrived.

Top tracks include “Ghost of God” and “One Last Night”.