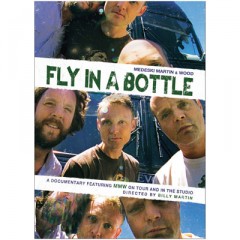 Eight Things I Learned from Fly in a Bottle:

Through nothing more than a 16mm film and digital camcorder, Fly in a Bottle was pieced together serving as the documentary for Medeski, Martin, and Wood. For those of you who are not familiar with the group, they are comprised of John Medeski on piano, Billy Martin on drums, and Chris Wood on bass. Spanning over the course of a year, Fly in a Bottle provides a window into the creation and ever-developing Radiolarians Series. From their studio in New York to a radio show in South America, the documentary presents a take on the band that previously had yet to be known by the common fan.

The documentary can be broken down into three major acts: recording at Shackston (the group’s studio), traveling to South America and California, and going back to Shackston. The initial recordings at Shackston is probably the most uneventful part of the documentary, but does an incredible job of setting the stage for the rest of the film. After a lengthy and elaborate set up, they settle in and prepare to record. Before this happens, however, Billy Martin stares directly into the camera for a longer-than-comfortable amount of time, almost as if bringing the viewer into their world. This eerily personal act is a genius way to begin the film, and from here jumps into “Amish Pintxos” and live clips from All Good (both awesome things).

Then came the tracking of “ijiji” and a discussion following the session. After a solid amount of recording, the group threw the tracks onto a laptop, went into a different room, and began to deconstruct the song while rebuilding it at the same time. It was intriguing to see, although at times hard to hear everything said, how each member’s distinct thought process influenced the outcome of the song and each other.

“Come on, little fly. You can make it out!” The exclamation can be heard over a clip of the trio putting their heads together to get a fly out of a glass bottle. Appropriately enough, this scene serves as the source of the documentary’s title. Although the meaning behind the phrase Fly in a Bottle is undoubtedly up for debate, it causes one to question the state of the band throughout Radiolarians. Did they feel as if they were the fly itself: stuck in a circumstance with a seemingly simple exit strategy, and yet finding it challenging to grasp the conclusion? Or were they approaching it as the outsider, seeing the inner workings of a concept and merely mediating the path to the outcome? Or maybe (most likely) it was just a fun scene to include in the documentary, and Billy thought it would sound cool to use the instance as a title.

The next scene opens up in Brazil, where nothing but busy streets, clear blue skies, and sunshine can be seen. This section has a fairly even blend of musical activities as well as everyday events. The day-to-day vibe of the band discussing what they want to eat for dinner and play for the night’s show is paired against their live performance of “Flat Tires”. After Brazil comes Argentina, where the trio is featured on a local radio show. Giving both an interview and in-house performance (once again victim to an unbearably lengthy set up), the trio clean up nicely in South America and makes their way back to the States.

If there is a scene to open with for coming back to America, the Redwood forest would be on the top of that list. This is one of the more personal and visually stunning scenes in the film, where the band can be seen simply hanging out in a national park, taking in the sights, sounds, and smells (bay leaves, maybe?). Following these events is a smooth transition back into the studio atmosphere, where the movie winds down with a handful of tracks being played, some footage of Wood practicing, and a montage to the sounds of “Undone” wrapping up the events in the film.

One aspect that I could have done without were the trippy montages here and there thrown in by Martin (who also directed the film). If I wanted to spend my time watching scattered visuals and goofy images running across the screen, I would purchase a strobe light, shrooms, and simply listen to Radiolarians II while utilizing the two previous items. These features felt like nothing more than someone who isn’t accustomed to directing attempting to do things they believed to be artistic or experimental. Regardless, this didn’t necessarily detract from the documentary, just seemed to fill in the gaps between scenes.

Another bone I have to pick with Fly in a Bottle was the lack of presenting the band’s development through creating the tracks for Radiolarians I, II, and III. The process to create these albums was like no other, virtually writing the songs as they toured, bringing new ideas to every city they came across. I find this to be such an interesting concept and was looking forward to seeing it executed through the film, but this theme was lacking. There were moments where Fly in a Bottle flirted with this idea (the whiteboard scene after tracking “ijiji”, a live performance scene of “Flat Tires”, etc.), but overall approached it significantly less that I was hoping.

Criticisms aside, there is a lot to take from this film. Whether you are a fan of watching the band’s talk about their music or seeing the incredible arsenal of instruments at their disposal or even the daily routines of each member, there is something for every fan. From seasoned super fans to the most lukewarm of listeners, check out Fly in a Bottle and see for yourself.